I was lucky enough to be in Madrid when the Book Fair took place this year. It was in the famous park Retiro. 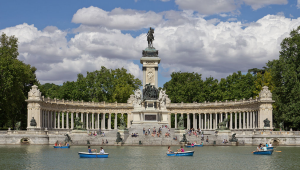 I had landed on Spain a day before, and I had jet lag but I couldn’t miss the Fair. I did not regret my decision. The Book Fair 2014 was a great experience.

Walking by the 364 stands and meeting the famous authors who came to sign their books was exciting, even though it was really hot. No wonder the bottles of water were the first to be sold out.

Among the authors, I had the chance to see John Connolly, Maruja Torres and Almudena Grandes who signed one of their books for me.

The only thing that I missed it was the lack of indie authors. I had read recently a blog post by the award-winning author Hugh Howey about the RT bookfair ’14, in which he explained that independent authors had been unjustly separated from «real» authors in a different section (you can read the post in here). But in Madrid there was no separation. Because not many indie authors were even invited. Great.

Hoping that will change in a better future, I can only end this post with a pic: I bought this book, not only because its author is great, but also because it has my first name in the title.